Moriteru Ueshiba – Aikikai Aikido doshuHow it all started
All over the world people used to fight with sword, spears and other weapons. When they had no weapons at hand, they boxed or wrestled. These techniques of fighting were almost the same all over the world until the invention of guns. The use of guns for fighting completely changed the way wars was fought.

The Portuguese imported guns into Japan in 1543. The Japanese quickly started to make guns for themselves. Around 1590 guns were being used for fighting in wars and were proving to be more efficient than traditional weapons. The use of guns was still limited because of limited fabrication.

The Samurai era
About 1600 Japan was dominated by the Tokugawa clan who succeeded in creating a system of domination by samurai. In order to stabilise their dominance, the production and use of guns were prohibited along with communication with the outside world. This gave an opportunity to develop fighting methods without the use of guns for approximately 250 years whilst, in Europe, guns were developed as the main weapon of fighting.

After 1800 Europeans started to colonise China. Europeans were not initially interested in Japan since it was small in comparison to China. The United States also wanted to participate in the colonisation of China and planned to use Japan as a port before arriving in China. Around 1860 the US navy came to Japan and forced her to give them a port as their territory. Since European countries also wanted to use Japan as a port Japan was in danger of being colonised just like China. Japan decided to create a strong army in order to defend itself from the US and Europe. The use of the sword was prohibited and the army began to use guns.

Formation of martial arts
Samurai clans, that kept the tradition of sword techniques, were unhappy with the ban and tried to preserve the practice. One way was to convert the traditions to a sport. This resulted in judo, kendo and later karate.

University students supported these sporting types of martial arts. The martial arts that did not want to follow the sports way were called Kobudo or jujitsu. One of the jujitsu was called Daitoryu Jujitsu and this is the technical basis of aikido. It is important to note that judo and karate techniques are derived from martial arts that do not use the sword. That is why karate includes stick but not sword techniques.

The birth of aikido
As the techniques of Daitoryu Jujitsu were practised the original sword basis were forgotten in favour of an emphasis on street fighting. After World War II, there was a general idea that Japan should not fight and people should have neither guns nor sword. People began to think more of how street fights would be fought without weapons or maybe just with a stick or a knife. This situation gave birth to the new name of Aikido. The idea of aikido was to control a situation without fighting. This mentality corresponded to the tendency in US and Europe after 1960 and aikido started to get supported philosophically. The idea of resolving a conflict without fighting became a part of the philosophy of aikido.

This led to the idea of self-defence. What is self-defence? There is no difference between attack and defence. When one does certain action toward the other, it is called an attack. When the other does the same thing, it is called the defence. Defence is permitted only when one is attacked. If the attack comes without a weapon, it is possible to wait until the attack comes and then do something about it. However if the attack is done with a gun or another highly developed weapon, it is almost impossible to defend oneself after the attack has started. One would have to shoot before being shot.

What is the right level of self-defence?
The question of knowing the intention of others now becomes important. If a person has a gun in his hand, a policeman will doubt his intention and will immediately demand him to drop his gun and put both hands up. If it is dark what should the policemen do? A policeman might be obliged to shoot before the possibility of being shot. The question would then arise as to whether the policeman correctly judged the situation or not.

It is more complicated if the attack and defence are between two countries. If a country is attacked but doesn’t know who attacked her then the country might assume that the attack is done by an enemy country and start to attack in the name of defence. Between two human beings, this would be called revenge and prohibited by law. Since the government punishes criminals, victims do not have to resort to revenge. Since there is no authority above two countries revenge is permitted. It is not easy to distinguish between revenge and defence. The whole problem comes because the act of attack, revenge, and defence are the same. It is only a matter of interpretation.

In aikido, it is possible to create a completely new philosophy. Aikido does not have to be a self-defence. Defence is the same as attack. Aikido is a way to create a situation where it is difficult to attack. If an attack does not happen, defence is not necessary. I think this is the only way for peace. 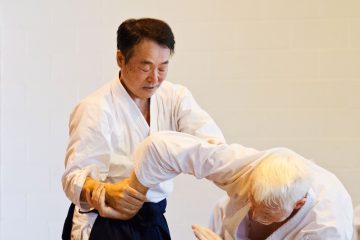 We are delighted to have Mimuro sensei (7th Dan, Hombu) back in Wimbledon Aikido Club for a 19.06.22 (Sunday) seminar. It’s been a long 5 years since the last event so we are very excited to host a 2 x Read more… 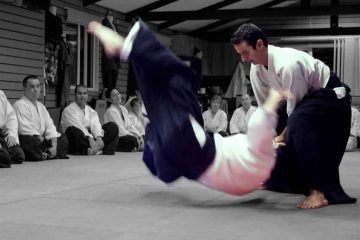 Interview with Karesz Hoffer about Aikido

How did you get involved with Aikido?My generation had an inevitable influence from the martial art movies from the 80s and 90s. I’m pretty sure that a lot of people got very keen on learning Read more… 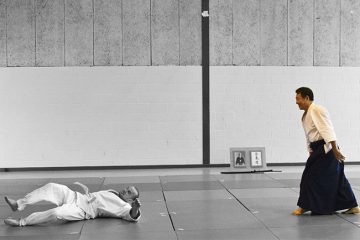